Plant a tree in memory of Kody
An environmentally-friendly option 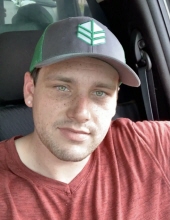 Kody Lee Webb, 26 of Pamplin, VA passed away on June 25, 2021. He was born on December 16, 1994 to David L. and Emma Bateman Webb. He is remembered as a jokester with a contagious laugh. He loved Christmas and birthdays. He loved his brothers and sisters and teased them constantly but was very protective of them. Kody was kind and compassionate and was loved by everyone he met. He enjoyed fishing, camping and being outdoors. When Kody was a baby, His dad began taking Kody on hikes. At the beginning, his dad would put Kody in a backpack. Soon they were hiking together.
Kody played lacrosse, football, and soccer and graduated from Prince Edward High School. In his youth he was active in Boy Scout and his church.
He met and dated his wife, Tiffany Hunter, daughter of Terry and Allison Hunter, while they were in High School. After graduation, Kody moved to Utah and lived with his grandparents for about a year. He decided to return to Virginia. After eight years of dating and Tiffany graduating college with a teaching degree, they were married on September 21, 2019.
He worked at Walmart as a stocker, a Correctional Officer, was a heating A/C apprentice and worked for a roofing company.
He is survived by his wife, Tiffany Hunter Webb; his parents David and Emma Webb; eight brothers and sisters Kora L. Webb, Karalynn L. Webb, Kolorado L. Webb, Kireland L. Webb, Kammon L. Webb, Kowen L. Webb, Kanyon L. Webb, and Katiemarie L. Webb; a niece Amara L. Webb: grandparents; Richard and Sandra Webb; and Gail Reed; Michael and Lillian Bateman; His father and mother in law, Terry and Allison Hunter; Tiffany’s grandparents, Donald and Diane Gilliam, and Allen and Lucy Hunter; and brother in law and sister in law Adam and Devon Hunter; niece Davina K. and nephew Allen B. Hunter and many aunts, uncles, cousins, and special friends.

An inurnment will be held at a later date at Trinity Memorial Gardens, Rice, VA

Plant a tree in memory of Kody by clicking here.
To send flowers to Kody's family, please visit our floral store.

A service summary is not available

Plant a tree in memory of Kody
An environmentally-friendly option

Plant a tree in memory of Kody

1 tree planted in memory of Kody

There are 5 photos available in the gallery

Kody your smile, laugh and incredible heart will never be forgotten.
So many loved you and miss you.
Until we meet again
We love you
KLW1
“That’s Aggressive”

A Memorial Tree was planted for Kody Lee Webb

Plant a tree in memory of Kody